Unless you’ve been living under a rock for nearly two decades, chances are, you’ve heard of Facebook.

Even if you don’t have a profile, or you do and don’t use it, you’ll have encountered it in one way or another. They even made a film about how it came to exist.

Below, we take a look at the platform, highlighting what it is, what it does, who uses it and why it’s not only good for business but what businesses should be using it.

Allowing individuals to create free profiles where they can connect with friends and family, share pictures, videos, articles and their thoughts and opinions. However, since its initial creation, it has also become a key marketing channel for business over the last decade and was the key player when it came to the creation of social media marketing.

While more than 2.7 billion people use the platform monthly, daily, Facebook receives around 1.6 billion visits, with users spending 34 minutes on average on the platform.

Great for brands, when you break it down further, you’ll find that the majority of Facebook’s users fall into the 25 – 34 age bracket (around 32%). Meanwhile, teenagers are using the platform less and less, with only around 51% of American teenagers aged between 13 and 17 using the platform in 2019, compared to 71% in 2015.

On the flip side to this, the over 65 age group is Facebook’s fastest-growing group.

Meanwhile, the audience is more male-dominated (57%), while 74% of Facebook’s users are high-income earners, which could be great news for those looking to sell and promote their products and services on the social networking site.

With so many active daily and monthly users, Facebook brings a huge potential advertising reach.

But, while you may be thinking that while there are more than 2 billion people on the platform, could advertising there be like screaming into an empty room. Well, the simple answer to this is no, no it’s not.

When looked at, social media marketing on Facebook can be hugely beneficial to businesses of all shapes and sizes, with 78% of American consumers discovering retail products to buy via Facebook.

Further to this, 18.3% of adults have purchased a product through Facebook in the last 12 months. This figure is far higher than other social media platforms such as Instagram and Pinterest, which saw 11.1% and 2.9% of adults purchase through the platform in the last year.

Broken down, the average person on Facebook clicks on 12 ads a month, which is roughly one every 2.5 days. Meanwhile, while men may be more present on Facebook, women click on more ads – 15 per month compared to 10 by men.

As you can see, while Facebook is a great place for users to connect with friends and family, the potential benefits for brands to reach an audience are equally as huge.

As a business, you’re probably sat wondering if Facebook is the right place for you or not. The truth of the matter is, it’s not perfect for everyone.

Aside from this, Facebook may be home to huge brands such as Samsung, Coca-Cola, and McDonald’s, with 160m, 107m, and 79m followers respectively, it’s hugely beneficial for local businesses.

Research has found that 42% of businesses based in more suburban locations use Facebook (42%) compared to more urban ones (33%). Meanwhile, local group membership on the platform, where members of an area communicate in a specific place, grew 3.3x last spring, helping them to keep in touch with their local community.

This also appears to have had a knock-on effect, with searches for local business increasing by 23% and two-thirds of Facebook users visiting a local business page at least once a week.

As you can see, when it comes to marketing, social media is hugely important and seems to be becoming more and more important for local businesses, especially on Facebook in an ever-competitive digital landscape.

The key, however, to social media marketing is to ensure you’re focusing on the right platform for your brand and audience, before delivering a killer strategy.

If you’re unsure of where your brand would be best suited, here at Relative, we specialise in all forms of marketing, including social media marketing, and can help point you in the right direction before delivering that all-important strategy. To find out more, contact the team today. 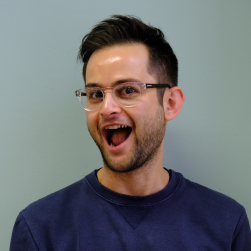 Made in Wales, Lewis worked for the only Pot Noodle factory in the world as a teenager! He then moved up north to study Journalism and media studies at University. Lewis has a self-confessed love of musical theatre and Madonna, which borders on the obsessive, and regularly spends all of his money on books, which he adds to his ever-growing pile at home. As a copywriter, his role at Relative requires him to write words in many forms for all our clients.